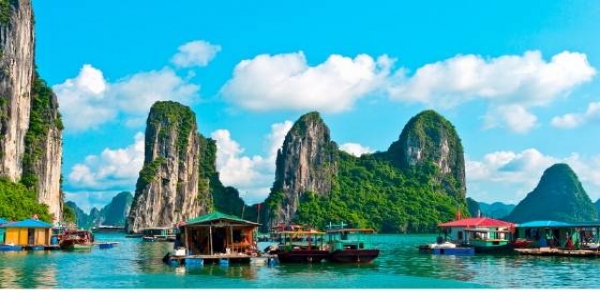 ARTICLE BY:
Traveler Plus


Visiting Vietnam is an educational experience about history and customs.  Many of the local residents still honor an older way of life and customs.  You still have farmers that cultivate their farmland via bison-pulled blows and it makes you feel like you are in another time.  You also can see architecture that was built centuries ago.  The contemporary sites memorialize the more recent history, like the Vietnam War.  So you have the best of the old and the new .

In This article we will answer top 12 frequently asked questions about Vietnam .

Where is Vietnam located?

Vietnam is located in the South China Sea and has ports in the Gulf of Tonkin.  China is to its north and Cambodia and Laos are its neighbors in the west. 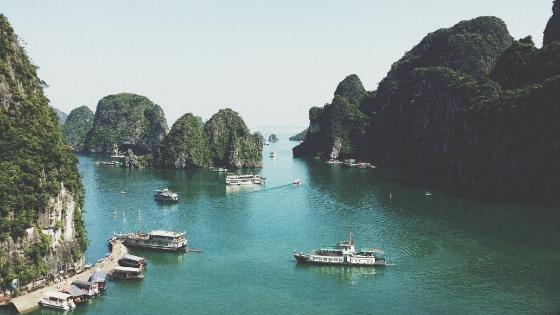 What is Vietnam known for?

The Vietnam War from the 1960sand 1970s, for starters.  Vietnam also houses 8 UNESCO sites including the ancient town and city Hanoi and Hoi An, respectively.  Vietnam is also known for its delicious cuisine, coffee and beer. Terraced rice fields are all over Vietnam as well as motorbikes.

Is Vietnam safe for tourists?

Crime-wise, Vietnam is considered to be a safe place for tourists. The police are ubiqutous so there a hardly any reports of robberies, sexual assaults and muggings.    However, there are scams.  Reports come out of Nha Trant, Hanoi, Hoi An and HCMC. They are described below in the section entitled “what should I avoid in Vietnam?”

Another caveat is to watch for the animals of the sea while scuba diving, snorkeling and swimming. There are plenty of stingrays, scorpion fish, jellyfish and sea snakes.  You will probably scare them away but you should still watch for them 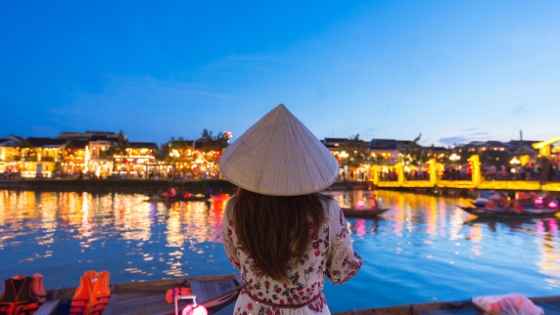 What should I avoid in Vietnam?

will have names similar to the legitimate travel companies, so perform online research to check the companies out before you purchase from them

2.Money switch is a “sleight of hand”

scam where someone will switch your denominations and give you back smaller denominations.  They then act like you are trying to scam THEM.  This is prevalent among the drivers of motorbike taxis.  A common switch is from a 500,000 VND note for a 20,000 VND note.  Both notes are blue so this is easy. It is best to pay with small bills.  You can cash in your larger bills for smaller ones at reputable businesses like restaurants and conveniences stores.

it is usually carried out by a team of females.   A female flirts with you, rubbing your groin, asking you if you want a massage, and then pickpockets you while you are distracted.

4.A bag of tea is another “switcheroo” scam

After observing and smelling a bag of marijuana, a tourist agrees to buy it and then the seller switches it for a bag of tea.  This scam is usually performed by motorbike taxi drivers who hang out at bars and hostels.  Since marijuana is illegal in Vietnam, good luck reporting it.  This is like a scene out of the movie “Ocean’s Eleven”.

is where a vendor with bamboo baskets of coconuts asks you if you want to take photos of these baskets.  While you are taking the photos, they chop open coconuts, that you did not ask for, and charge you. When you protest, the locals shout at you because they think you are trying to cheat another local.  This scam usually takes place in Hanoi.

when a beautiful woman lures a man into a massage parlor promising a massage, and then she leaves and a very unattractive woman takes over.  This is like a scene from several movies.

There are other scams where tourists are asked to pay unreasonable charges for music, towels and water.  If you protest, some underworld goons try to muscle it out of you.

There are several stories about motorbike taxi scams.  The driver tells you one price when they pick you up, and then a much higher price after you arrive at your destination.  They know you will not want to attract attention with an argument.

Watch out for drivers who claim that they are taxi drivers.  They paint their car to look like a reputable taxi company, and also install meters that give you fake amounts.  THEN they try to do the money switch scam described above.  Try to use Vinasum and Mai Linh taxi companies whose cars are white and green, respectively.

when a taxi takes an unnecessary and very long route to rack up fees.  Some drivers from reputable companies pull this.  Actually, this happens in the United States, too.  Have your map on your phone and let the driver know if he gets “off route”.  It is best to take Grab or Uber since they follow routes via cell phone.

Just so you know, there are no baggage fees in Vietnam, so if a bus driver or employee tries to charge you extra to store your bags in the bus’s lower luggage area, politely refuse and then sit down in your assigned seat.  That’s another thing . . . do not let anyone try to move you from your assigned seat.

What is the best time of year to visit Vietnam?

As you can see on the map, Vietnam is long and covers several latitudes.   So it depends on if you want to visit the north, central or southern part.  The most popular time to visit Vietnam is from December through February since the temps are nice and there is little rain.   You can avoid the typhoon and monsoon seasons.  However, it is less crowded in the spring from March through April, but that is because it is hot with temps averaging 80 degrees Fahrenheit.

There are many holidays or days of observance in Vietnam, but the major ones are as follows:

How many days should I spend in Vietnam?

Vietnam has 8 of the world’s UNESCO sites, and they are all worth seeing so, it depends on how many sites you want to visit.  Do you want to go the tourist route or off of the beaten path?  Tourists usually stay between two to three weeks.   Here is 7 days Travel Itinerary for Vietnam . Save it up and travel efficiently.

What are the top things to do in Vietnam?

The ancient town of Hoi An. Great history.  Great food 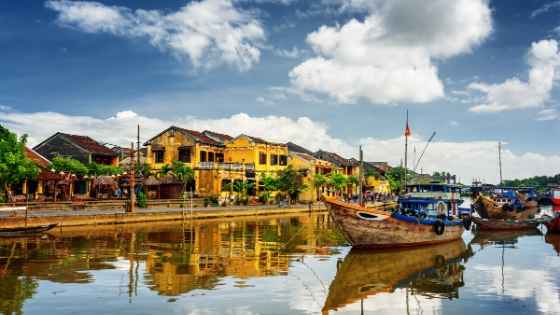 in the southern part of Vietnam which is also known as “the rice bowl”. You will see rice farms and see the rice farms

which used to be known as Saigon. Did you know that the same guy who designed the Eiffel Tower in Paris designed many of the buildings here, too?  Go figure.

which includes Son Doong Cave, which is the largest cave in the world


What NOT to do in Vietnam ?

consider this Part 2 of previous section “things to avoid while in Vietnam”.

What's the best places to stay while visiting Vietnam?

Westlake in Hanoi. This hotel sits in idyllic peace next to the 800 year-old Golden Lotus Pagoda, and is also close to the Old Quarter.

This resort offers villas that are close to three UNESCO World Heritage sites and sits on a beach. You will have the opportunity to enjoy incredible views and kayak on the East Sea.

in Nha Trang has villas that are very private with their own pool, a sundeck or a garden terrace. The villas are situated so that you the best worlds of beach and mountains.

4.The Pilgrimage Village in Hue

Offer rooms or bungalows that sit in a village setting.  It is close to historical landmarks as well as sites that exhibit modern Vietnamese art and architecture.

It is  located in Ho Chi Minh City which was once known as Saigon. The Grand Saigon is a Five Star hotel that was originally built in 1930.  It is close to historical sites and houses restaurants, bars and a roof top lounge.

6.Victoria Can Tho Resort

Can Tho, in Mekong Delta is set in beautiful riverside landscapes where you can view the green paddy fields and also travel through your choice of canals.  The Lady Hau embarks from the resort for sunset cruises

7.Bask in the French

Inspired elegance of the Flower Garden Hotel in downtown Hanoi.  The room views are amazing!  The Flower Garden is close to West Lake or Ho Tay and Truc Bach Lake where you can commune with nature.

In Hue is located in a 100 year-old historic building that is ranked as one of the top five historic hotels in Vietnam.  It is close to the Perfume River and Truong Tien Bridge.  It also houses indoor and outdoor restaurants and meeting rooms. 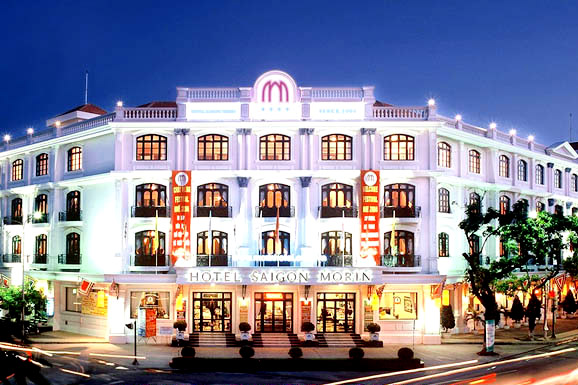 in Hoi An is a boutique hotel in the countryside that is surrounded by fragrant frangipani trees, rice fields and a fresh fruit garden.  You almost forget that you are near the city.

Is Vietnam good for nightlife?

First, remember that Vietnam is a Communist country and is serious about its politics, so keep that in mind while you are socializing.  Vietnam is also strict about people wearing “depraved” clothing, so be careful of what is printed on your t-shirt.  The drinking age in Vietnam is 18.

Hanoi has a lot going on at night.  You can enjoy performances at the Golden Bell Theatre and Saigon’s Opera House offer traditional dance shows.  You can also check out the world of the Hanoi street vendors.  Hanoi also offers fancy restaurants and bars where you can get cocktails and grub. Honorable mentions include the Bia Hoi Junction and the laid-back Hanoi Press.  Many of the major hotels have casinos that offer legal gambling for people over the age of 21.

How do you get around in Vietnam?

Vietnam is very long from north to south, so it is best to fly if you want to go a long distance within a short amount of time.  Check out flight options in our “Flight” section.  Otherwise, the least inexpensive option is to travel by bus, but they are usually crowded.  They do have “sleeper buses” which you can use to both travel and lodge during the night. There have been reports that the restrooms are usually out-of-order on sleeper buses.  Trains are reliable but more expensive.

You can also travel via cyclobikes (electric) or motorbikes, especially in larger cities.

What is the most popular food in Vietnam?

which is a Vietnamese Noodle Soup that has rice noodles (bánh phá»Ÿ), broth, herbs, and beef or chicken. 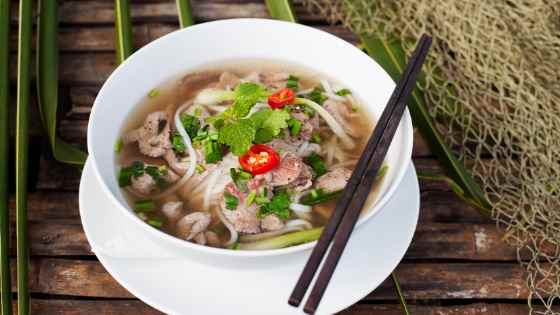 Ran summer or fried spring rolls that will make you lick your fingers. 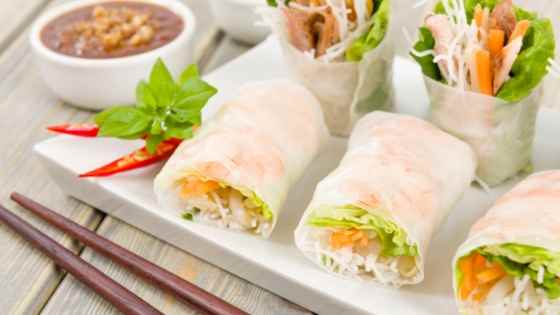 actually is the Vietnamese word for bread but usually refers to baguettes that are split lengthwise and filled with tasty stuff and served as a sandwich.

actually translates to "sizzling pancake” from the sizzling sound it makes when poured into the skillet. The batter is includes turmeric powder and rice flour. This pancake or crepe can be stuffed with bean sprouts, pork, green onions, shrimp, and pork.

It is grilled and marinated beef atop rice noodles, vegetables including pickled carrots

It is slowly cooked and sliced pork, herbs and bean sprouts serviced in a rich broth atop deep fried wonton crackers and noodles. We feel happy just thinking about it.

Although you might be able to sample Vietnamese food via restaurants outside of Vietnam, you can only experience the history of its architecture in person.  Besides, the Vietnamese culinary experience is just better when you eat and drink it within the ambience of this country.   It is also easy to travel to and within Vietnam.  Happy and safe travels!